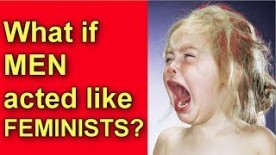 On February 6, 2016, a scheduled multi-gathering of men that follow  the MGTOW movement, specifically, Roosh V.’s Return of Kings blog, received such negative news and social media attention that digital petitions were circulated to collect signatures of people opposed to the local meet-ups, and even leaders of nations had something to say about the man, his blog content and their dislike for both.

That isn’t the best back story. I’ve not done the details any justice. But, I’m not so interested in what Roosh V. and his supporters are doing as much as I am disgusted with the response they’ve received. It is, in the world I’ve been living within, completely out of pocket, inappropriate, over the top, and once the dust settles, I really hope that there is a collective group conscience that grasps how really appalling the reaction had been. I would describe it as histrionic as well as it being most revealing about how those that proclaim to be defending the rights of half the population was so very quick to aggressively shut down the basic rights of a much smaller group of men to gather peacefully to meet and express their beliefs freely.

Here’s the thing, people: It’s really none of your business. When I read one self-proclaimed feminist activist say that her petition against these meetings was to protest and fight “terrorism against women”, I had had enough. This woman is far more responsible for escalating violence than anything I’ve come across from the MGTOW crowd. If she honestly believes that these men are waging terrorism against women, she is delusional and needs psychiatric evaluation and possibly treatment.

I am much more concerned about the people stomping all over the civil liberties of others than I am in any way disturbed by a bunch of guys getting together to drink beer, slap each other on the back and hook-up with women hanging out in bars.

Women patronize bars and clubs. Women are adults and as such they are agents of their own free will. You have heard of self-agency, right?

Well, here’s the bombshell. Ready for it? Listen up. The majority of women who are drinking in bars and clubs actually WANT to hook up with a guy. It’s why they are there. Can you imagine that? Women are out there HOPING that they’ll run into a man who can charm her pants off. Literally. So wtf are you actually trying to achieve?

Frankly, what all this has done in my opinion is PROVE the points some of these men have been making about ‘green haired activists’ and ‘feminazis’ and ‘white knight types’.

Bottom line is that that it is NOT OK to threaten Roosh V.’s mother and family with personal violence. It is NOT OK to make it unsafe for people to gather peacefully to talk about what they believe and it is NOT OK to twist words to make them fit an agenda that threatens the civil liberties and self-agency of other human beings who do not share that agenda.

Maybe your agenda is actually WRONG.

Maybe it isn’t nearly as universally sound as you think it is. Maybe you need to mind your own business and work on fixing ACTUAL problems of terrorism and personal violence against women, such as the ones you, Green Haired Activist, are creating for us.

I want no association to any person who self-describes as feminist, at this point. I am just thoroughly sickened by the stupidity and hypocrisy this entire week’s events surrounding Return of Kings blog followers.

All the adults should grow up, already.

...with my mouth closed.